Dar es Salaam is becoming a bit of a venue for international artists- the past five or so years has seen the likes of Jay-Z, Sean Paul, Akon, Brick 'n Lace, and other pop tarts- I mean stars- come through. More interestingly, Bongo has also been able to attract heavyweight live musicians from the continent like Oliver Mtukudzi, The Soweto String Quartet and McCoy Mrubata- all of whom I have been delighted to watch from just a couple of meters away. There is nothing quite like standing within yelling distance of these stars and being able to request favorites! Last night, that involved singing Malaika along with Angelique Kidjo and 7 Seconds with Youssou N'Dour: 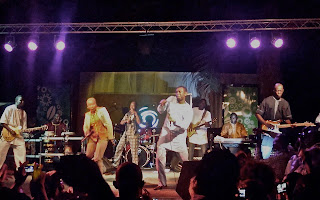 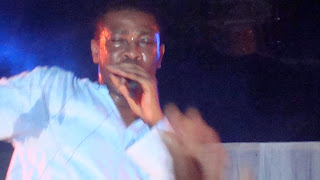 Which reminds me: Sauti Za Busara 2010 is around the corner.
Posted by Elsie Eyakuze- at 2:20 PM No comments:

How you vote is how you eat.

I already wrote about one aspect of the intersection between class and food- arguing of course in favor of the elitist view that quality matters. But food security is undeniably a tricky thing. I remember reading a fairly recent article where a government employee made a statement along the lines of "Cassava should be the staple food of Tanzania." Excuse the lack of attribution- but clearly this is a wishful statement rather than an actual government policy. However, it does point out to the problems of treating food in a utilitarian manner. Common sense suggests, for example, that for our modern mass society to really prosper we should all be mostly vegetarian with a lot less animal protein in our diets. But this is not culturally feasible at all for many of us, your truly included. Since I tilt to the left, the best I can do is compromise the way that any good liberal will by trying to 'eat smart'- whatever that might mean. And according to this interesting experiment in social surveys, there is a relationship between a person's food and their politics.
Posted by Elsie Eyakuze- at 11:59 AM No comments:

It is summer, and therefore there must be intermittent power cuts carefully timed to hit during the hottest part of the day. Like today. While waiting for the power to come back I read through the remains of a blog that looked mighty interesting in its time. Kifimbocheza left an elegant, intriguing and somewhat poignant last post to serve as a marker for his blog’s grave.

I was reading him because he turned up as I searched for blogs to put under the (new!) Tanzania blogger links section which I will populate over time. His post brought up something interesting that we rarely talk about directly in Tanzania: racial politics. Whooo-eee are they complicated! In our cyberspace, no issue is thornier than the concept of authenticity- who is Tanzanian and how representative they are and what this allows them to say about the country with any authority.

Well, identity is complex. The criteria for selection for Tanzanian blogs is pretty simple here: blogs whose content is mostly about Tanzania. The nationality of the blogger is secondary since it that is generally an accident of birth and immigration laws. Blogging intelligently and deeply about a place that is well-known and beloved by the blogger should be open to anyone across boundaries of residence permits and melanin levels, even language barriers.

Another point of interest in the identity debate is the use of anonymity. Kifimbocheza would not reveal his on his blog, and a number of Tanzanian bloggers- yours truly included- use this to free them from censorship from various sources (themselves, the state, society). Although I understand the need for this, it has left the Tanzanian blogging scene a bit denuded of flesh and blood characters with whom to engage. It is something that I grapple with every time I write a post here, under my name, worrying about its reception and consequences. Blogging is fun, but blogging while ‘out’ can be daunting.

A slight lapse in sincerity

In a fit of pre-election inspiration, the government decided to brand this fiscal year with a catchy-yet-considerate theme: Kilimo Kwanza. Agriculture First is an excellent program to promote considering the statistics that are often bandied about- 42 million Tanzanians and 80% of those living in the rural areas with most of them farming for subsistence. By caring about agriculture, the government is purporting to care about the poor majority. However, those numbers also hint at the fundamental problem that arises from the Kilimo Kwanza program, that of a lack of commitment on the part of the government to make deep and lasting changes in the lives of the majority of Tanzanians.
Just a couple of years ago, the education sector was unfortunate enough to become the subject of a massive government initiative. Eschewing true investment in improving the quality of education, the establishment went for the easy kill- increasing access to education by throwing money at things that can be seen and counted. So innumerable primary school buildings have been built, and every ward was very strongly encouraged to build a secondary school so that every single student who successfully completed their primary education would be guaranteed a place. Where were the teachers going to come from, the teaching aids, et cetera? These were mere details that were not allowed to interfere with the government's top-down approach.
Fast forward to today, when the government has moved on from Education to its new mistress Agriculture. Ward Secondary schools are not doing very well. The students have realized that they are being shafted with crappy new recruit teachers who don't know the language of instruction let alone the subjects in any depth. Take a moment to imagine thousands of young Tanzanians simmering with the realization that their government has shafted them, and that they are not going to get the education they thought they would...and let that thought marinate for a couple of years. I hope Kikwete's successor has a plan for the youth vote because s/he's going to need it.
That education sector story is just a recent example of the many well-intentioned but hopelessly hollow initiatives out there. So I was a little skeptical about the Kilimo Kwanza gig when it appeared- there was that excess of official exuberance that is the hallmark of a dubious proposition. I have been lying in wait for months for the cracks to show. Patience does get rewarded in some small measure, as this story shows. It could be argued that in a developing country like this one, there are innumerable demands on public officials-how, oh how do they pick which sitting allowance to receive each day? But perhaps this is reason enough for the government to stop promising sweeping changes the likes of which it cannot effect. And perhaps this will be one more piece of evidence in the case for a strong, expert and indigenous civil society to bridge the development gap that the government cannot.
Posted by Elsie Eyakuze- at 12:29 PM 1 comment:

Exactly the same, except not.

Hi folks! I am happy to announce the launch of The Mikocheni Report. Just Another Day in Paradise, the original blog, was laid to rest quietly and with no ceremony earlier this morning. It was fun while it lasted, but a long period of silence coupled with an accumulation of intentions to improve the blog seemed to demand a radical change. So I did for the blog what any good friend would do for someone who needs a feel-good pick-me-up would do: I took it to the spa. It went in as Just Another Day in Paradise and emerged as...well, The Mikocheni Report.

There is still some work to be done, but in the meantime I hope you enjoy the new and improved version as much as I have enjoyed putting it together. The content remains more or less the same because politics, urban life and food are subjects that just keep giving. Let the good times roll.
Posted by Elsie Eyakuze- at 5:33 PM No comments: