The Places That Begin With Q

Go to Mozambique*, they said. It's fabulous there, they said. Wonderful country...they said. I got excited. Mozambique...even the name suggests that this is no ordinary place. It's got z's and q's in it and is pronounced differently by every accent I have ever heard. We call it Msumbiji up here, our quiescent neighbor with whom we have a long relationship colored by the harder, darker parts of liberation and pan-Africanism...

Tanzania is a complex society- we have many byzantine tendencies that I don't find in the same quantities in fellow Southern African states- let alone Kenya. Double-speak is natural to us, Kiswahili doesn't lend itself to plainness unless one intends to be brutal. But Mozambique? Schooled me. I have never met a people who have such natural resistance to the Tanzanian Charm Offensive. Considering how much I depend on the TCO to navigate, this was a shock. I'm afraid it is hard to outclass a seasoned Tanzanian social operator, but we have nothing at all on our Mozambican neighbors.

I like complicated places. Lost lands call to me. This Quelimane (Kilimani) that we went to: southern outpost of the Swahili Coast, even further out than the mysterious ruins of Qiloa (Kilwa). I was curious to see what it would be like in these quiet hinterlands of the former Sultanate of Zanzibar. Would the music hark to the sound of violin strings and Swahili Blues, would the architecture show glimpses of the slave markets? Would I be woken by the warm and familiar sounds of the morning call to prayer, would they tie their khangas the same way- would they even call them khanga? Would 'salaam' or some version of it work as a greeting?

In the end, no. They drink Five Roses tea in Mozambique, no spices, for shame. They showed me the school where Robert Mugabe taught back in the 1980s. All of their main streets are cryptically named for long-forgetten events, or after the many dead of the African Leftist past. They bury authors in their Hero's Crypt, not just soldiers. They dance like nobody is watching.

Bom Dia. Todo Bem. Long beards and kanzus abound, as do crumbling churches and filigreed mosques. Everyone is a little bit of something and a little bit of something else: afro-portuguese, mixed, situated. They might not make it obvious by my god, the place is steeped in class and race/color divisions with a healthy helping of religious polarities- all this besides the political divisions of a post-civil-war society. Perpetually wet with rain, ridiculously fecund, with an architecture that seems to want to both recruit you to a greater cause and break your heart all at once!

"I have never heard you talk about a country like this before" said La Dee, amused that I had to call every 48 hours to download how overwhelmed I was. This is no land to put a sensitive soul into, unwarned. Poets and writers, singers and lovers, travelers and dreamers: be thou careful here. You might go, but coming back will be a science.

Go to Mozambique, they said. It's fabulous there, they said. Wonderful country...they said. Mozambique...even the name suggests that this is no ordinary place. Mozambique yielded almost none of her secrets to me, which can only mean that I must now labor under this mystery. It will be a deep and desperate and unrequited love. Honestly, Africanism is not a healthy lifestyle. I don't recommend it. I love it. I am conflicted. These places that begin with Q? Queridos.

*So on the official side: I am part of a team working on a Learning Pilot with the Public Service Accountability Monitor (PSAM) based at Rhodes University in South Africa. We have blog. If you are in 'Development', have an interest in Governance/Southern Africa/ Civil Society/ Development Practice/Research Methodologies/Aid and Donors et cetera? Come by and read, it's pretty good. Karibu.
Posted by Elsie Eyakuze- at 3:03 PM 57 comments:

The Other Governance Structure/Why Nobody Gets Called 'Daddy.'

Y'all know how I go on and on and on about the patriarchy. Believe it or not, I actually appreciate some elements of patriarchy when they are done right. Just because I am a feminist doesn't mean I am immune from my own cultural conditioning, hey, and besides one should always be aware of the distances between the ideals we hold and the realities we inhabit.

This week's article is dedicated to the the very many Africanist pretenders towards the title of "Father"- be that Father of the Nation or any other non-familial paternalistic ambition. An elderly client of mine once invited me to call him "Baba" as opposed to Mzee, or Sir or any number of alternative titles that I always have on hand. I had to politely decline the honor for a simple reason: there is only one man in this lifetime whom I called that and the title died with him. That word has...weight.* 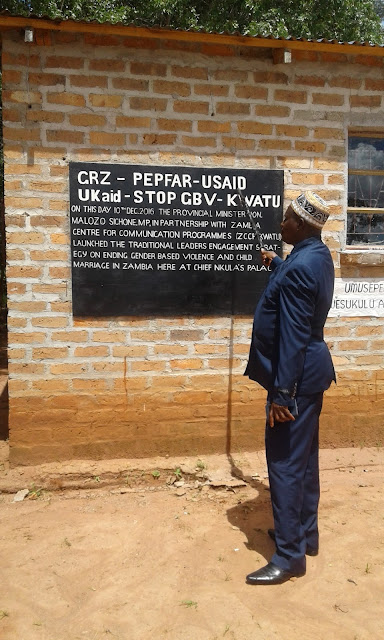 So, you can imagine how unamused I am whenever people inappropriately baptize our leaders 'Father'- especially when the posts they occupy are electoral ones (not even hereditary, jamani!). Eti I voted you in and then I call you Daddy? Not likely, mate. It is a cultural conflation I despise. As republics, we must guard against this mother-father business and refuse to infantilize ourselves in relationships of power.

That said: I met a total patriarch about a week ago...and it wasn't the worst. Coming to The East African sometime next week, a musing about Bemba royalty:

"I leave you with this little note on patriarchy: Senior Chief Nkula's pronouncement upon his ascension to Chiefdom- and I paraphrase, like, massively- was something along the lines of: “I shall expose my breasts so that my children may feed from them, abundantly.” That our strongest men, our wisest leaders and our most peaceful countries are the ones that admire and adopt qualities of motherhood is a source of pride to me not only as a feminist, but as an Africanist. May our mother continent feed us abundantly. May we thrive."

HRH** Nkula confirmed my long-held belief that the best Fathers know enough to be in touch with their feminine side and appreciate what it does to enhance their leadership. Strength-through nurture, people, strength through nurture. If you want to be called a Daddy, be worthy of the title. #clears throat.#

*Turns out the only other guy I naturally call Baba is my nephew, but there isn't enough space in this blogpost to weave in a discussion about names, inter-generational practices and African terms of affection.

**Dodged a bullet here, folks, the proper form of address is "Your Royal Highness." No need for Baba or Tata or any other controversial-to-me titles.

April 2017: A Note on Blogiversary the Ninth

Still alive! April 2017 marks the 9th Blogiversary of The Mikocheni Report and a good time to assure you that the project is not abandoned. Here's a fat wall of text to make up for so long a silence.

These past few months have been a period of hibernation and reflection for a number of reasons:

1. Writing fatigue happens. Social media with its incessant appetite for fresh content is not the best milieu in which to admit this, but I think that blogs are close enough to traditional writing products such as essay collections that this aspect of writing need not be concealed. I took a break to try to recharge. Learned from the TZ blogs I admire and visit in the blogosphere that taking time off is fine.

2. We have a new President. In the spirit of giving the Fifth Administration a fair amount of time before forming opinions, I have been in observation mode. However my distress is evident in the columns I put out for The East African. I started writing for public consumption in the very hey-day of Kikwete's media-forward regime. Let's just say that the past decade has in no way prepared me for a repressive government that is afraid of freedom of speech.

Was it all roses and champagne under Kikwete? Of course not. Very many journalists and prominent outspoken people were threatened, some physically assaulted, newsrooms were raided and repression did not disappear. However my sense was the the heavy hand of state that we felt then was a manifestation of a characteristic of our Deep State. Our Deep State has never been fond of too much civilian liberty, I can't imagine what impatience it  experienced with Mr. Kikwete who was altogether too jovial a believer in people's right to say what they think and feel. My interpretation was that the difference of opinion between the President and the conservative elements of his party and government in this regard worked in our favor. This came at a cost. Ten years conservatives have been waiting to pick up their tools of state repression again and beat us into line.

Trouble with freedom is that once people have had a taste, we are loathe to give it up easily when commanded to do so. The signal that President Magufuli is sending is a very strong one: media has been to told to watch itself, that we are not as free as we think we are. There are numerous utterances that he has made even before that last one that articulated his opinion and attitude towards free speech. It has been an unwelcome shock, and part of the reason for a good hibernation. How does one recalibrate when the environment in which you work suddenly contracts?

Under Kikwete it was fun to joke with people who asked me how I could get away with "strong" opinions- my standard response was to ask them to contribute to my bail fund. These days that joke has taken on an edge. Those of us who have fully exploited our freedom to express and been obnoxious about insisting on said freedoms as our right are now challenged to put our courage where our mouths and pens are. There have been casualties. People have adopted various strategies: some have become careful in their pronouncements. Some have chosen straight-up sycophancy out of either self-preservation (disgusting, but smart) or a real (and troubling) inability to resist rolling over when figures of authority say so.

Some of us are going to keep doing what we do, perhaps with some adjustments here and there. Only two years into what could be a decade of Mr. Magufuli in office, I still maintain that it is too early to be certain. We seem to be negotiating the boundaries of free expression on a day-to-day or event-to-event basis. Yes, it was exciting to be part of the crowd that thrived under President Kikwete's easy fondness for media and entertainment. It is also exciting to be part of the crowd challenged by President Magufuli's regime and the conservatives who are taking advantage of the situation to go much further, I suspect, than the incumbent himself would necessarily allow. It is still not a one-man show in Tanzania, not just yet.

Anyways, enough about politics. I could make the usual promises about revamping and refurbishing and better visuals and more frequent postings... but we all know how that goes, right? Instead let me end by thanking you for reading, and a special thank you to those who occasionally hit the 'reply' button. A lutta continua.
Posted by Elsie Eyakuze- at 3:13 PM 4 comments: