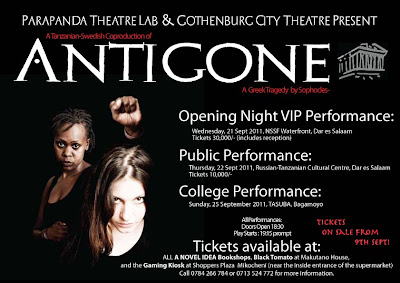 When a classic Greek tragedy opens with a man playing the thumb piano while delivering the prologue- a summary of Oedipus Rex and Oedipus at Colonus- in Kiswahili, you know you are about to be subjected to Art. Anything might happen. Sophocles' Antigone was given the postmodern treatment in a joint production by the Parapanda Theatre Lab and Gothenburg City Theatre.
I have a healthy respect for Traditions, but never more so than when they have been subverted and deconstructed almost beyond recognition. This production used Antigone as an excuse to play with a dizzying array of ideas. The plot was clearly subordinate to the experimentation. Frankly speaking, for a story that opens with death and closes with death, the play itself was the only thing that died on that stage. But that's what we have classics for: like Lazarus they can be brought back to life to suffer someone else's murderous reinterpretation. This production wastes none of its 1 hour 45 minutes explaining anything to anyone. It rather tyrannically demands that you keep up.

Let's start with the fact that the lines are delivered in Kiswahili and Swedish, with the sound and lights guy projecting the English translation onto a light backdrop using black Powerpoint slides. Suddenly you are watching a trilingual play with music and subtitles, completely uncertain of how far they mean to go with this. There was no backstage- all instances of disrobing were symbolically done onstage where red costume pieces were exchanged by cast members to signal the handover of a character. At any given time, Antigone might be a Tanzanian woman or a Swedish woman. Haemon, Creon, everyone was up for grabs as actors were called forth to incarnate a character before fading back into the mostly quiet ether of the Chorus. It gave the play a rolling sense of duality: dead/undead, alive/unalive, on/off, black/white, modern/ancient, individual/collective...

At one point I realized that I was grateful that they didn't cross the gender barrier too because things might have unravelled with no constant for an audience member to hold on to. Antigone remained female, Haemon and Creon remained male and I firmly shut the door on gender identity politics so that I could focus on whatever else they were trying to say.

The Swedish minimalism was a nice touch. If a Swiss army knife turned into a play it would look like this: clean lines, strong visual branding, red and grey with multiple ideas efficiently packed into a small space. Take the make-up, for example: nothing but a white line on black faces or a black line on white faces, a passing reference to the Greek actors' mask, a demand that we never forget that the Black/White encounter is a central theme. Like the Nike swoosh or the monochrome Apple logo, it collapses some very big ideas into a lethally efficient visual metaphor. In its own understated way, the production was visually lush.

The Swedish actors came bearing the gift of their acting style: high drama mixed with naturalism, that steely direct gaze, a touch of mild buffoonery with the messenger role. There was an interesting dynamic going on there: Johan Karlberg played lighter roles leaving Creon mostly to Frederick Evers. Physically Johan looks like the guy who gets called up by Viking reenactment groups on a regular basis, while Frederick looks like that guy who sells you carpets and bathroom fixtures at the local showroom. The reversal they pulled off was a rather sly poke at typecasting, but also just good casting: Frederick's regular-guy Creon lurks beneath a thin veneer of civility and good humor. It was hard to tell whether/when he would turn monstrous, one of the best way to play a villain. I really enjoyed Nina Zanjani's scene where Antigone goes to her death: fear, regret, damnable pride and unexpected vulnerability. But I have to say, Anna Bjerkerud seemed underserved. The matriarchal Euridyce role was too easy for such a regal woman, I wish they had messed with our heads a little by maybe giving her some Antigone or maybe the messenger.

The Tanzanian performers? Not so contained. Parapanda are a troupe in the Bagamoyo tradition: they sing, they dance, they act and they play music. They do it all. Naturalism, minimalism, long brooding silences followed by explosive emoting have little place in this style, and when that stuff happens performers rarely drop the barrier between themselves and their role. What the Tanzanian performers brought to the play was a certain light-footed, emphatic energy. They also saved the production from getting too cerebral, too ephemeral. I never thought I would be grateful for a little humor in a Greek tragedy but by the time the witch doctor showed up, I know I wasn't the only person to exhale in that room.*

But it wasn't all songs and jokes: Daudi Joseph might have smiled and snorted and relished swatting flies as a blind witchdoctor, but his comedic timing is flawless and like with Frederick's Creon something genuinely frightening hid itself behind his playfulness. Eva Nyambe's Antigone is exactly the kind of jaw-clenched woman you never mess with at a market stall or at a board meeting. She manages to channel Antigone's fatal flaw in a world where death and glory are masculine pursuits. She reminded me that this is in many ways a feminist play, and complicated. Antigone is not a sympathetic character, even if Nina Zanjani showed us the cracks in her facade.

Amani Lukuli turned out to be my favorite performer in a night of solid work. His Haemon was a warm and appealing young man, affectionate with his father and brimming with excessive passions. His Haemon was obviously stuck in that interesting extended adolescence when it is all or nothing, death and glory. He painted the Anarchist sign on his father's wall as a farewell. We all know that guy- he wants to get the revolution started right this minute and keeps posting Facebook updates about Global Poverty or Western Imperialism or The Environment or why Hip Hop is dead. He's terrified that he might turn into his father, and when Creon is your father this is a real problem. Amani also got the physical aspect right, prancing around yelling and brandishing his can of spraypaint even though his online pictures show that he's growing a nice set of crow's feet. At no point does he make fun of Haemon. Though the audience might chuckle- he's careful with him. Well played, sir**.

The production had quite a number of flaws. The interactions between the characters didn't always work across the language barrier and sometimes the differences in acting styles also got in the way. The pacing was uneven, there was some dead space, I would have liked to see a bit more physicality because that's what makes theatre thrilling. Especially in a play that demands such massive suspension of disbelief on the part of the audience. It was an overwhelmingly ambitious project but I think they pulled it off in the end, perhaps because they approached the cross-cultural conversation with care and respect.***

Two nights is not nearly enough in a town where professional theatre is almost impossible to come by. Music, Dance- they get lots of love, but Theatre is definitely neglected. I watched Antigone for the first time when I was around eight and I haven't recovered yet. I asked a couple of kids who attended this production what they thought. They were popping with energy and excitement where kids normally wilt into a nap, escape or complain incessantly to cope with incomprehensible adult entertainments. This is the kind of production that should be staged at the national theatre, free entrance for all primary and secondary school students. It has a fighting chance at recruiting some impressionable young minds to the highbrow arts, so that we can start to heal the wounds inflicted upon us by Nyerere's brutal political decimation of Tanzania's cultural and intellectual life. It might even inspire the Tanzanian theatre scene to come out of its defensive coma.

*I'm straight-up grim when it comes to acting. I like my actors tortured and soul-searching and slightly unhinged, I like to see the naked fear in their eyes, I despise burlesque lighthearted treatments of dark brooding plays. There is far too much levity in the entertainment industry as it is. But I think that Parapanda have convinced me to re-examine my prejudices.

**Haemon, he's got the same problem as Ophelia. The doomed lover, utterly peripheral to a central characters' self-absorption. I think Amani rescued the character from forgetability. No mean feat.

***One has to be careful about collaborations. If you don't watch out, you can end up "supporting" Shakira as she bellydances in some vile animal print me-tarzan-you-jane outfit on your stage while you provide the background vocals yelling "Waka,Waka, eh eh!" But that's a rant for another day.
Posted by Elsie Eyakuze- at 2:17 PM

No biting, spitting, trolling or ugly insults- only pretty ones allowed.